Sensational news! At least we can say that in today’s scenario. Where life is so dependent on social networking websites. In nutshell, it’s difficult to imagine life without the internet. Just a mere thought of it, will make all of us freeze, isn’t it?

But have you ever thought what would be the consequences if the Internet really went down? One thing is sure shot imaginable that it will be disastrous.

What if the internet stopped working for a day?

But luckily, it didn’t happen. Instead, one of the world’s biggest video streaming platform suffered a global outage on Wednesday (17th October 2018) morning, affecting every single user globally, including India as well.
Nonetheless, YouTube managed to reestablish the services back online without revealing curtain of reason over this global outage.

At 7:00 am, the moment YouTube went down, those first users who faced this issue took this report on Twitter. After some time, a bulk of screenshots and messages are tweeted/ retweeted one by one to YouTube with the hashtag YouTubewentdown. The surprising thing is that the video streaming platform is not the only platform that went down, but rather YouTube Music and YouTube TV were additionally influenced by this global outage. This global outage issue wasn’t particular to platforms as YouTube on web and applications were not working. Users globally who were affected were met with a blank page on attempting to get to the video streaming service.

Downdetector, a site that tracks Internet and telecom administrations, revealed that the blackout affected users around the globe. The live map indicated problem areas in parts of Europe, North America, South America, Asia Pacific, and India.

After over 30 minutes of blackout, YouTube said that its services were back on the Internet. The organization, be that as it may, did not uncover why its services went down.

” We’re back! Thanks for all of your patience. If you continue to experience issues, please let us know” it said. 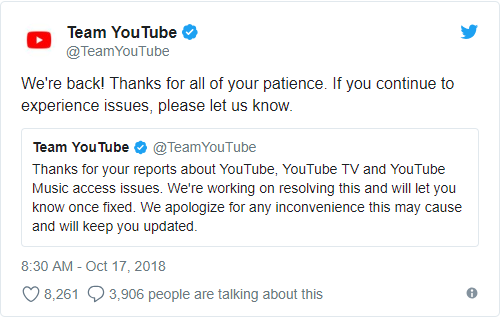 YouTube’s most recent blackout is said to be among the longest service interferences in the organization’s history. YouTube TV, which communicates live matches, confronted two noteworthy issues this year. YouTube TV went down amid the World Cup match among Croatia and England. A few users griped of the service not working during the different matches too. An exact occurrence occurred during the time of an NBA match in May.

In 2008, YouTube went down for a few hours after the Pakistan government’s endeavor to square access to the administration in the nation. The blackout was bad to the point that it even caused correspondence issues between the Middle East to India.

While YouTube hasn’t yet explained the cause behind this global outage, multiple theories point towards a plethora of possible agents in which one of them connects with a group of hackers. 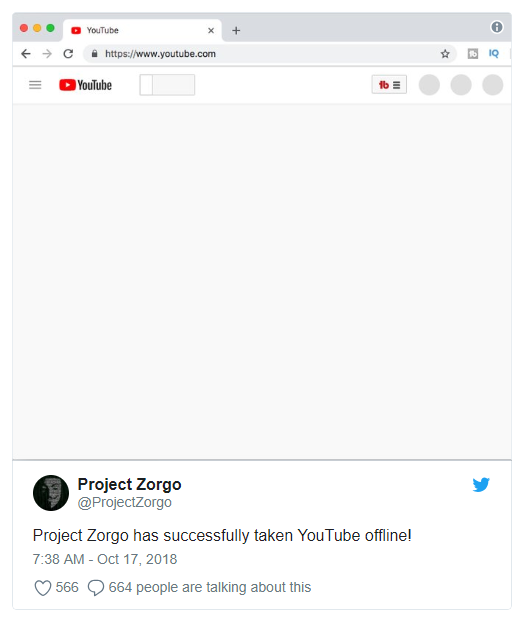 The Twitter account profile likewise points to a possible involvement in the global outage, reading, “We are the YouTube Hacker group. We believe YouTube has become too powerful and is a threat to traditional media.”

In addition, this group of hackers also claimed to have hacked YouTube’s trending page in early September, which they advertised with a dramatic video. According to the clip, the Project Zorgo had placed one of their own videos on the trending page, which was titled, ‘Project Zorgo Doomsday Date.’

They say that the September hack was just only phase one in their DoomsDay plan to take down the online video platform.

Other probable causes include that of the organization ICANN, who reportedly switched the security keys to YouTube’s DNS servers. While neither of these possibilities has been confirmed by YouTube, the site is now up and running as usual – for now.